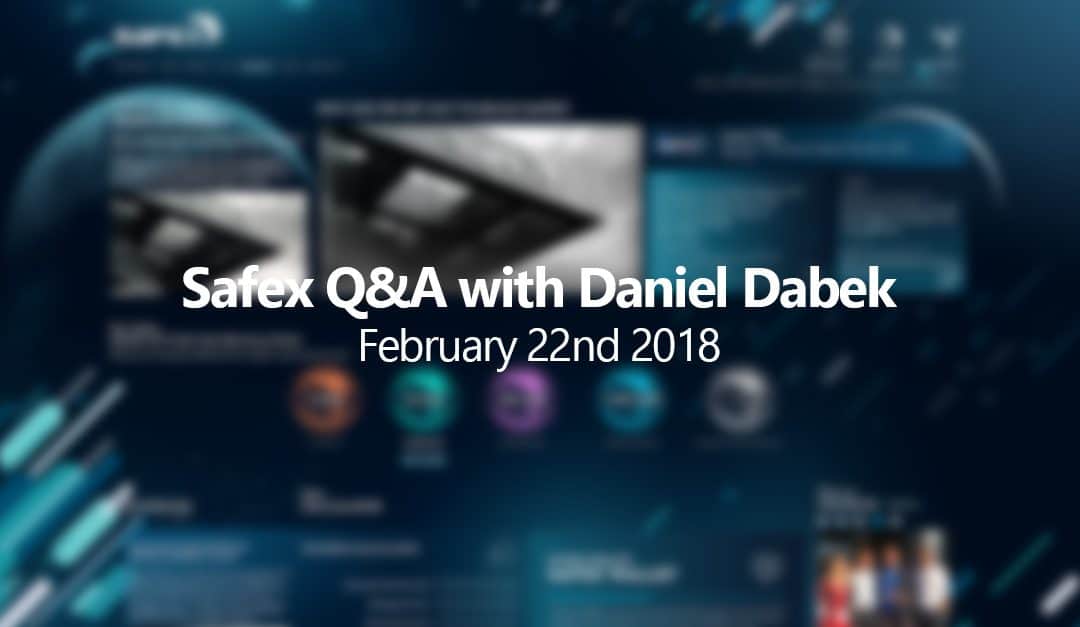 On Thursday Afternoon (EST) Daniel Dabek held an impromptu Q&A on the Safex Discord Channel. We’ve managed to record the Q&A and upload it to the website.

Below are some shortened versions of the questions and answers for those who don’t have enough time to sit and listen to the full interview.

Q1 – Do you have any technical details about the new mining algorithm?

A1 – The mining algorithm we will be using is CryptoNight, similar to Monero. It will be CPU and GPU friendly and has 1 minute blocks.

Q2 – When do you expect the exchange listing you paid for to go live?

Q3 – How is Safex’s development funded.

A3 – We had an ICO two years ago and raised 70 Bitcoins and 1.4 million MaidSafe Tokens. The money was invested and used to get Safex to where it is today.

Balkaneum was set up as a fully funded company to focus on the development of Safex and was funded in traditional investment channels.

Q4 – Any information of the scalability of the Safex Blockchain

A4 – The blocksize will adjust over time based on the backlog of transactions pending in the mempool.

Q5 – How many developers have you employed so far?

We have open interviews with developers right now.

Q6 – What is the latest status of the Balkaneum offices?

A6 – The new building is currently being redecorated and should be ready to move in during the first or second week of March.

Q7 – How confident are you that the blockchain and marketplace will be exactly how you planned it?

A7 – It’s a huge task. What we need to understand is that how we envision things will change as we build and use it. When the community gets involved and provides their feedback, things will evolve.

A8 – we didn’t want to over-estimate the volume, so we set a low target so we’re not over hyped and realistic. We’re confident that we’ll reach this volume with the amount of money we’re planning to invest in the marketing.

Q9 – What official relationship is Safex with Liberland?

A9 – Daniel Dabek is the Liberlandian representative to Serbia. Safex is in the Liberland treasury. We don’t expect Liberland to use Safex as their official currency, but they will at least recognise it.

Q10 – When do you expect to start promotions and marketing for Safex?

A10 – Right now it’s not the time for full scale marketing – right now we have a wallet and a blockchain in development. Once we have a usable product we’ll be running a huge mass-market promotion (adverts, banners, content, social media etc).

Q11 – What can the community do to get involved in promoting Safex.

Q12 – Has the Safex Alpaca found a place to hang?

A12 – As soon as the office redecoration has finished

Q13 – Would we be able to use Safex Cash outside of the market place?

A14 – Right now it’s quite a hassle distributing t-shirts with how busy we are. However, if anyone comes to visit us in Belgrade you can have one.

Q15 – When will we get a timeline/roadmap?

A15 – It’s difficult to say right now but let us get our new develops settled in and a plan sorted, and the roadmap will be updated as a matter of priority.

Q16 – Will the price of the Title Markets change over time?

A16 – It could be changed in the source code, but it would be up to the miners to support the new changes. However, it’s designed in a way where we want it to get expensive over time to prevent spam and random titles from being created.

Q17 – When and how the Airdrop will work?

A17 – It will not be a wallet snapshot airdrop on a specific date. You will be credited your allocation of Safex Cash when you convert your Safex Token over to the new blockchain.