Diffusion of Innovation and Safex 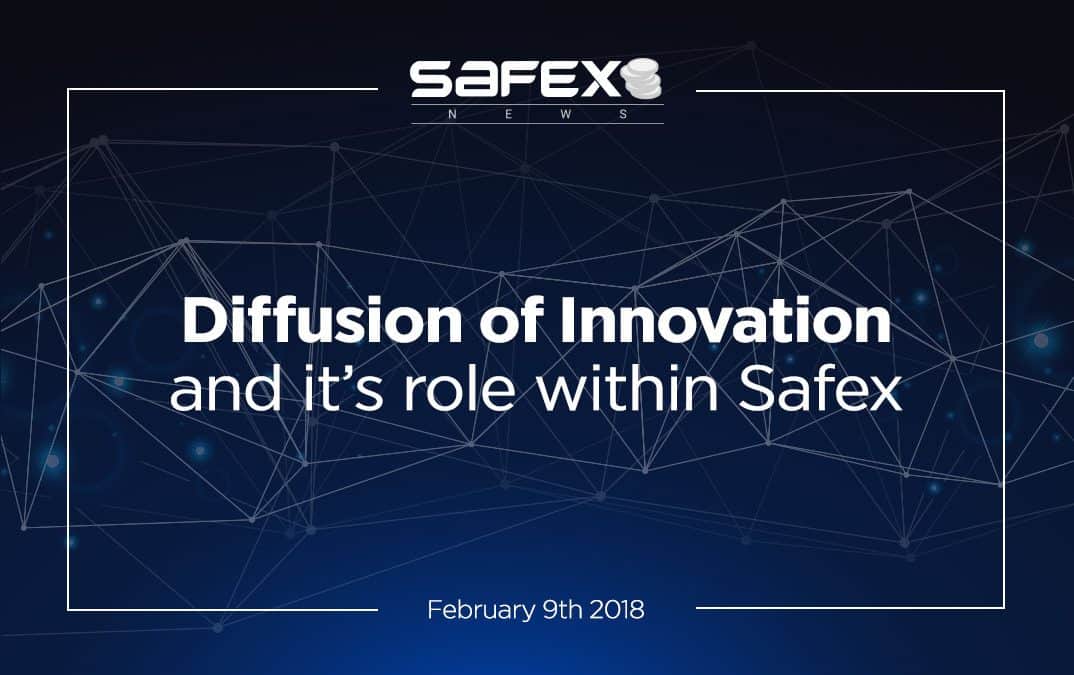 If you’ve read the Safex Blue Paper, you may have noticed the term “Diffusion of Innovations”. The term, originally coined by sociologist Everett Rogers, is a well-known model that tells us about how people adopt new technology and innovations over time.

In this article we will discuss how the Diffusion of Innovations model ties in with both how the Safex Marketplace will be adopted and how Safex’s marketing will adapt over time.

The Diffusion of Innovation Model

Created in 1960, the Diffusion of Innovation model describes the different phases of adoption of new technology and innovations.

Most people have seen the Technology Adoption Curve; a bell-shaped line which starts low, then sharply rises to a peak, and then tails back down as sharply as it rises. Typically, new technologies and innovations follow this bell-curve.

As you can see in the diagram above, the model is split into five segments. Innovators, Early Adopters, Early Majority, Late Majority, and Laggards.

Adopters in each phase of the innovation curve require a different approach in marketing, education, and integration. Simply put, what excites Innovators and Early Adopters about Safex, might not necessarily excite Late Majority and Laggards.

As stated in the Safex Blue Paper, the emission of Safex Cash will also follow this pattern. This graduated distribution avoids having too much Safex Cash added to the ecosystem too early, and not enough being around later when the large majority enter the market. It also helps avoid centralization. If you look at the history of cryptocurrency, you’ll frequently early adopters hoarding and holding a large majority of circulation (because it was easier to mine and there were higher rewards) leaving only a small percentage in circulation for use in what it’s designed for – currency.

Innovators make up around 2.5% of the adopter population. The number is small, yet these individuals are highly focused and expend a great deal of time and energy exploring new technologies and ideas.

The Innovators’ obsession, and passion about new projects such as Safex can seems out of step with the unidealistic majority; however, no change can begin to take place without their energy, passion, and commitment to trying out new things.

Innovators are the ones you’ll see regularly in the forums, discord channel, twitter, and other social platforms, discussing (sometimes arguing), speculating and dreaming about Safex. An eccentric bunch, but passionate and keen to spread the gospel.

We’ll also see a number of innovative vendors wishing to establish their brand within the Safex Ecosystem before the Early Adopters and Early Majority. It’s these vendors that will ultimately help shape the look and feel of the Safex Marketplace. We’ve already seen evidence of this with the recent partnership with Experty, and Daniel on-boarding multiple Ecommerce Merchants interested in getting into CryptoCommerce.

This is where we will start to see growth in interest and usership of the Safex Marketplace. Early adopters typically account for 13.5% of the population. These are the kinds of people that jumped into Facebook and Twitter before it was apparent that Social Media would play a big part in people’s lives.

Once the benefit of CryptoCommerce and the Safex Market becomes apparent, early adopters dive in. Typically, they’re always on the lookout for gaining advantages over their peers and have the time and money to invest.

Their supposedly “risky” punt into new technologies, such as the Safex Marketplace, gets people talking – and those on the side lines observe, seeing whether they’ll succeed or fail. Either way, this is where we’ll see a boom in conversation about Safex.

Early Adopters tend to be more successful and well informed, and as a result, more socially active and respected. During this phase we will see a huge increase in technology “influencers” and “advocates”; a great source of free promotion.

Remember those on the side-lines, observing the Early Adopters? Making up 34% of the population, the Early Majority a pragmatic bunch who are open to new ideas, yet don’t act without solid proof of benefits. They prefer to see something become an “industry standard” before they commit.

We must remember that whilst the Safex Marketplace ecosystem is progressing, so is the world of CryptoCurrency. The Early Majority come in when on-boarding and using CryptoCurrency comes with minimum disruption and minimum education.

These people don’t get overly excited about new technologies – they’re too busy living their lives. You’ll find that a large portion of the Early Majority will use the Safex Blockchain without even knowing it, most likely through a brand that’s utilising the Blockchain for their payment processing.

The Early majority don’t like faffing around – they like their products and services out of the box without having to learn how it works.

The Late Majority hate change. You know the types – those who think CryptoCurrency is just fake money and that it’ll never last. They’re adverse to risk and very uncomfortable with new ideas. However, it’s a large crowd making up another 34% of the population.

For these guys, social proof is of huge importance. They want to see people just like them using CryptoCurrency and Safex based services before they make the move (we can delve into socioeconomics but that’s for another article).

Like the Early Majority – many of the Late Majority will use the Safex Blockchain and Ecosystem without even knowing it. They’ll most likely be using services that utilize the platform outside of the traditional Safex Marketplace.

A difficult bunch to convince. Laggards, making up 16% of the population – putting up a fight to the bitter end. They’re heavily against adopting any new technology and see it as high risk.

Laggards aren’t typically your go-to audience for any start-up project, especially Safex and CryptoCurrency. However, as pessimistic as they are, some of their concerns are worth considering and factoring in to early platform developments.

Again, much like the Early and Late Majority, many of the Laggards will use the Safex Blockchain and Ecosystem without even knowing it.

How Safex is utilising the Diffusion of Innovation Model

The main thing to learn from the Diffusion of Innovation model is that it is both a model of change (technology, products etc) and a model of consumer behaviour (socially, economically etc). This is moulded into the evolution of the Safex Ecosystem, building upon it to become a better fit for each segment.

Progressing through the Diffusion of Innovation Model and listening to the feedback of Innovators and Early Adopters is an important part of getting the Safex Marketplace right before committing further resources for growth. Premature scaling is the main cause of failure for start-ups; quite often they need two or three-times longer to validate their market.

The Safex Development Team have been realistic about the potential of the market available to them at the time of launch.

It’s also recognized in the way they’re planning their marketing. Naturally, what appeals to an individual may depend on which Innovation Segment they fit in. So as the marketplace processes and greater adoption furthers, the message they promote will also change, appealing to different segments of the market.