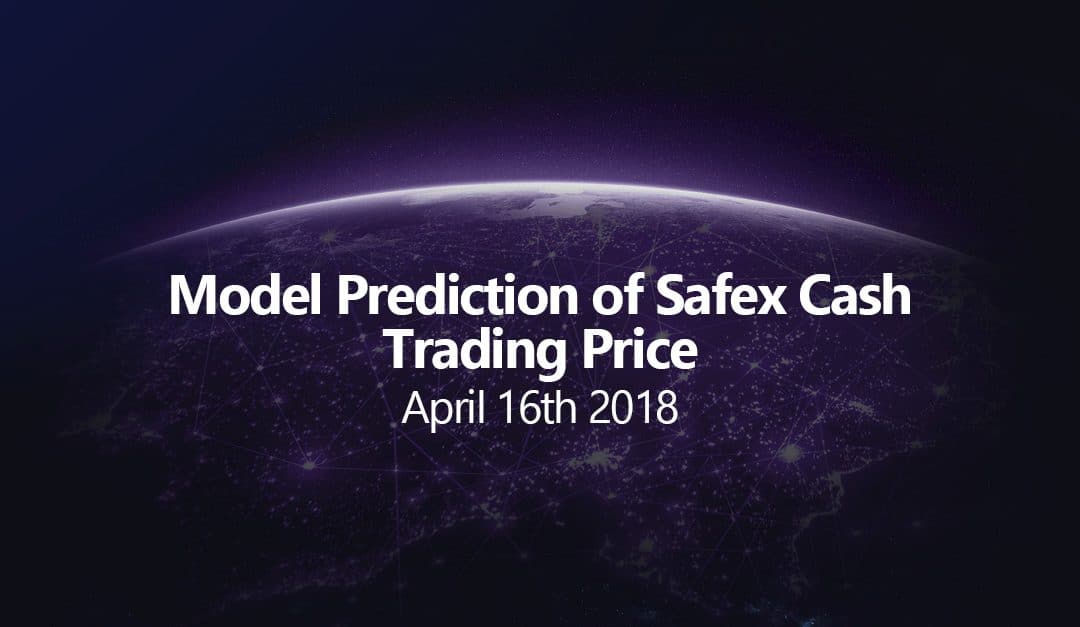 Community Content – Special thanks to Znffal for submitting this article. You can read his previous work here.

Disclaimer: I am not a financial analyst or an economist. This is not financial advice. This is simply the results of my personal research. Apart from holding a number of Safex Tokens, I am in no way affiliated with the Safex development team.

2018 has so far proven to be a “happy new year” for Safex holders, with the much-anticipated release of the Safex Blue paper. Indeed, outlined in the document are a number of noteworthy and exciting points, but here we attempt to answer the question: How much will each Safex Cash token be worth?

Of course, this is a complicated question and is dependent on many factors. To try to simplify the analysis (and avoid attempting to model the potential early price volatility) we will aim to predict the value of Safex Cash, (SxC), 6 months after the opening of the Safex marketplace.

In this article we refer to the currency used to buy and sell on the marketplace as “Safex Cash” (SxC), and the currently-available token (which acts as a “share” in the Safex economy, and is able to earn “incentives”) as the “Safex Token”.

The Airdrop and Mining Emission Rate

Outlined in the Safex Blue paper were details of the SxC airdrop (the number of SxC tokens given “for free” to holders of the Safex Token at the opening of the Safex marketplace) and the mining emission rate (the rate at which new SxC are created).

5,000,000 (five million) SxC will initially be distributed among the holders of the Safex Token, and the same amount to the Safex development team for promotion and other necessary expenses, totalling 10,000,000 SxC at the opening of the marketplace.

A key unique feature of the design of the Safex blockchain is the mining emission rate. As noted in the Blue Paper, adoption of new services or technology can be modelled as an “S-shaped” curve. The emission of SxC by mining is designed to follow this changing demand as marketplace adoption evolves. In the first year, the mining reward will be 30 SxC per block, with a block time of one minute, giving ~43,000 SxC generated per day, ~ 1,300,000 SxC per month, and ~ 15,550,000 SxC in the first year. Three months after the marketplace opens there will have been approximately 3,900,000 SxC generated, while six months after the opening that number will be approximately 7,800,000 SxC.

Combining the totals above (and rounding for simplicity), the approximate number of SxC in existence after three months of marketplace operation is ~14,000,000, and after six months, ~ 18,000,000.

So in the “second quarter” of marketplace operation, the total number of SxC will grow linearly from 14 to 18 million, averaging 16 million SxC.

As noted in an earlier article, there are many socio-economic reasons to be bullish regarding the potential trade volume that the Safex marketplace could generate, and even more so after the release of the Blue Paper.

A key economic concept is how quickly money passes from one participant in an economy to the next. This measure is usually called the “velocity of money”.

To further understand this notion, let’s look at a toy economy: the kindergarten black market.

On her morning crawl along the kindergarten floor, Amy finds a $10 note. Billy is playing with the rocking horse and Amy really wants to play, so Amy trades the $10 note for a turn on the horse. Billy is easily distracted, forgets the horse, and notices that Charlie is sucking on a brand new pacifier. Charlie agrees to trade the pacifier for the $10 note. Charlie then crawls over to Dawn, who likes the design of the $10 note. Dawn agrees to marry Charlie, build a house together, and have three children, in exchange for the $10 note.

In this kindergarten economy, the total amount of money was $10, but during that day it was used to purchase $30 worth of goods and services (see figure below).

Additionally, the number of SxC in circulation will not match the number in existence because of three main factors:

In order to move forward in the most conservative way (err on the side of lower coin price prediction), we take the number of SxC in circulation to be equal to the number in existence.

There are many standard money bases used in economics. Here we study three;

M0 supply (aka “narrow money”): This definition includes coins, cash, and assets which can rapidly become liquid. It is the “fastest” form of money; that which can be rapidly and easily spent when required.

M1 supply (note: in some parts of the world, M0 + M1 is also known as “narrow money”): This base is similar to M0, except that it does not include bank reserves. M0 and M1 money forms the currency used as the “medium of exchange” in a given economy (i.e. to purchase goods and services). As such, these two bases are the most appropriate to consider when studying the velocity of SxC.

M2 supply: This type of money includes M0 and M1, but additionally includes savings, market securities, mutual funds, and other time-locked deposits. This type of money is less appropriate to study mediums of exchange, but is better to describe assets that are held for medium periods of time.

In order to approximate an appropriate velocity for the Safex marketplace medium of exchange, SxC, we study the M0 and M1 velocity of nation currencies.

In the last 10 years, the M1 velocity of money stock (per quarter) in the USA has decreased from 10 to 5. The Euro-zone average M1 velocity is approximately 2.5, In Canada the M1 Velocity is around 8, in New Zealand it is around 6. Data on the velocity of M0 money was harder to find, but in the UK the M0 velocity has recently been between 15 and 20 (significantly higher than the UK M1 velocity)

The velocity of SxC is likely to be somewhere between the M1 and M0 velocities of fiat currencies. This is due to the fact that SxC is primarily a spending mechanism in the Safex marketplace (which suggests M0 is the more similar measure), but there will be those who choose to hold SxC for longer periods, for a variety of reasons (not to mention, we do not know when the 5 million SxC allocated to the Safex treasury will be spent). Therefore, we propose a likely velocity for SxC of between 5 and 20 quarterly.

So, in order for the total supply of approximately 16 million SxC to meet the demand of 250 million dollars worth of trade in the second marketplace quarter, each SxC needs to be traded/sold 5 to 20 times per quarter (note that this implies that the average time a user holds onto 1 SxC is 5 to 18 days).

The model and price prediction

Although cryptocurrency is in its infancy, there have been many economic models to try to predict the future evolution and price of the market. One such model is the “equation of exchange”, which is usually applied to “standard” currencies issued by sovereign countries.

Recently, the well-known Ethereum co-founder Vitalik Buterin published a modification of this model which is applicable to “Medium-of-Exchange Tokens”.

We present the model here (in a slightly modified form).

Solving in terms of our stated estimated parameters yields:

So using this simple model we predict a price of 80c to $3 USD for each SxC, 6 months after the marketplace has opened, assuming all targets are met. Note that this would correspond to a marketcap of between 13 – 48 million USD for SxC.

Assuming that 100% of Safex Tokens are migrated to the new blockchain and therefore eligible to participate, then, for every Safex Token that a user holds, they will also receive 0.0023 SxC at the airdrop. Factoring in that the expected price of each SxC is 0.8c – $3 USD, this means that, for each Safex Token held, we receive a potential subsidy of $0.00184 – $0.0069 (USD). At the average trading price from the last month (Coinmarketcap.com, Feb 14th – Mar 14th 2018) of $0.025, that represents a 7 to 27% discount on the price of the Safex Token.

For those of us who were lucky enough to buy closer to 1 cent (US), that discount could be between 19 and 69%. Nice.

The elephant in the room: HODLers

One key assumption in the modelling above is that the Safex economic system has reached a psuedo-steady state. It is unclear how long it will take for such an economy to stabilise, and there will possibly be large price variation in SxC very early on. However, if most or all SxC is allowed to be available for sale (i.e. people don’t hold SxC for long times) then the volume should allow rapid stabilisation in SxC price. It is also not clear how much of the 5 million SxC allocated to the Safex treasury will be in circulation on the marketplace.

This could have the effect of lowering the circulating supply of SxC and increasing it’s price. Given this fact, and that the estimation of trade volume in the second quarter is likely to be larger than $250 million, I expect that we will see the upper end of my price prediction by December 2018.

The model predicts that a small daily velocity of SxC would produce a price increase. This corresponds to people holding rather than spending their SxC. Although for holders this initially sounds like an attractive option, to generate rapid consistent growth in the marketplace, there must be free flow of SxC.

If too many users hold their SxC then the marketplace may become difficult to trade in, we may see large SxC price fluctuations, and we may stunt the growth of the Safex economy. In the long term, marketplace growth will be of greater benefit than short-to-medium term trading.

In my estimation, the spirit of the Safex Token is to HODL, while the spirit of Safex Cash is to spend. I, for one, will be doing just that.